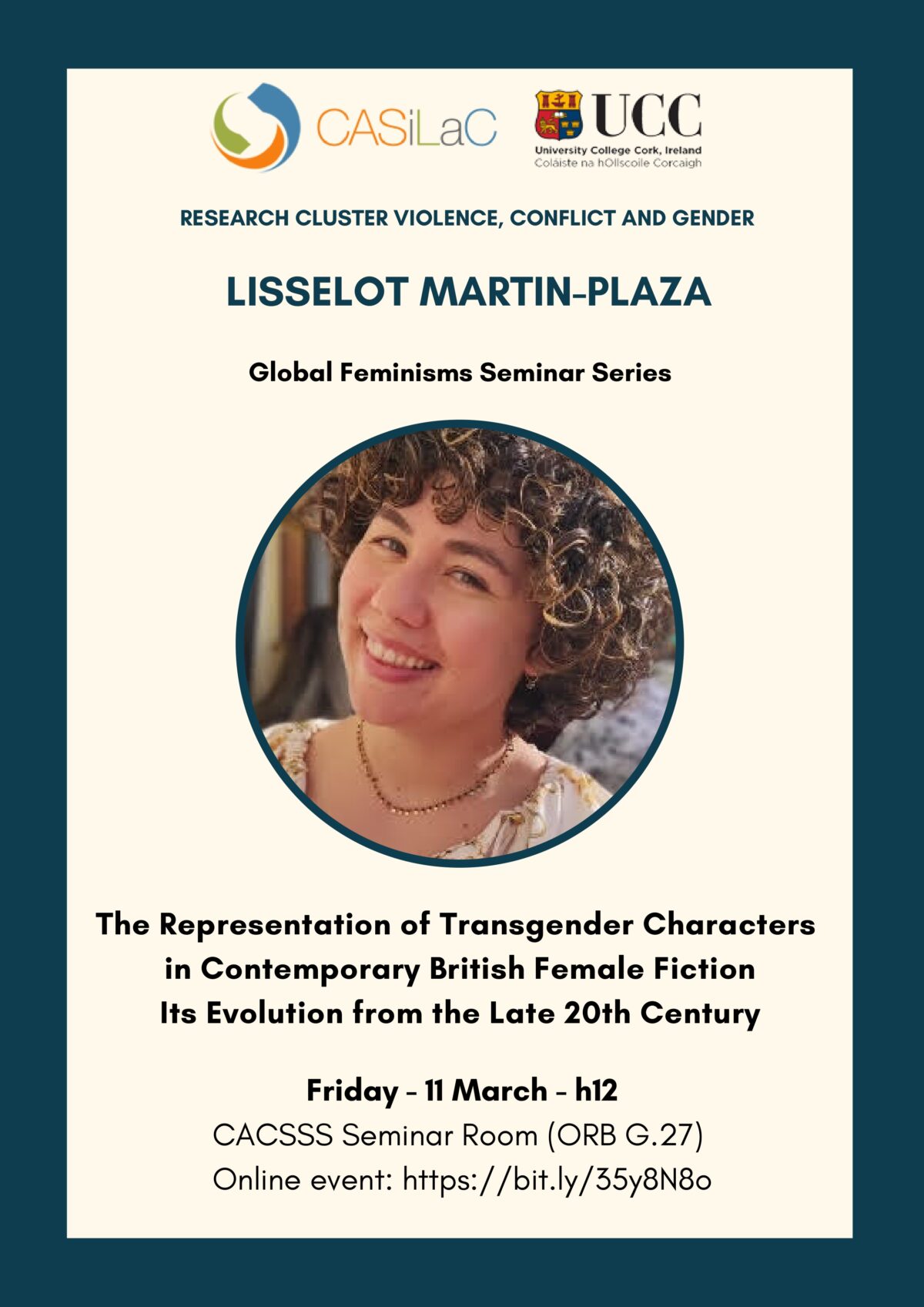 The Violence, Conflict and Gender research cluster in the Centre for Advanced Studies in Languages and Cultures (CASiLaC), together with Women’s Studies, invites you to join is for the next event in our Global Feminisms seminar series. This Friday, 11 March, at 12 midday, join us as we welcome Lisselot Martín Plaza, Erasmus visiting scholar and cluster member, to deliver her talk entitled: ‘The Representation of Transgender Characters in Contemporary British Female Fiction: Its Evolution from the Late 20th Century’. Further details below. This is a hybrid event. Those joining in person are invited to the CACSSS Seminar Room (ORB G.27) and those connecting online can do so at this link: https://bit.ly/35y8N8o.

‘The Representation of Transgender Characters in Contemporary British Female Fiction: Its Evolution from the Late 20th Century’

Abstract: This paper examines the representation of transgender characters – both white and racialized- in contemporary British fiction written by female authors. Offering an analysis of works from the late twentieth century to today, it studies the evolution in the representation of transgender characters. In terms of methodology, I combine both Literary and Queer Theories, with the feminist postmodern approach of authors such as Michel Foucault, Judith Butler and Paul B. Preciado being of outmost relevance to the analysis. On the one hand, the former encourages the examination and questioning of gender and sexuality in literary texts, while the latter intersects with it therefore allowing a further dissection of aspects of power, identity, and language – all resulting crucial to the analysis of the representation of transgender subjectivities in the selected works. As for the main research questions, the interest of this study resides in the portrayal of transgender fictions focusing on the (de)construction of binaries of sex and gender, with special interest in the intersections of the latter with race and class, thus aiming at offering an accurate overview of fictional individuals that exist beyond one sole axis of their subjectivity (be this queerness, race, or class group). Preliminary results so far have shown a persistent interest in the (un)doings of traditional heteronormative gender roles when embodied in transgender fictional subjects, with different attempts to deconstruct the above-mentioned binaries through debates on sexual orientation and representation of sexuality.

Lisselot Martin-Plaza is a PhD candidate from the University of Huelva (Spain) who recently joined the Violence, Conflict and Gender research cluster in CASiLaC as a visiting scholar. Her research focuses on the analysis of the representation of transgender characters in contemporary British fiction written by female authors, with special interest in the study of its evolution since the rise of Transgender Studies as an academic discipline in the 1990s. Her main research interests are intersectional gender studies, language, and discourse in their connection to gender, as well as queer deconstructions of the traditional binary of sex and gender. She originally studied English Literature at the University of Huelva (Spain) and Anglia Ruskin University (Cambridge, UK) pursuing a MA in Gender, Intersectionality and Change (University of Linkoping, Sweden) soon after, graduating with a thesis in Linguistic Deconstructions of Gender-Fluid Characters in 20th Century British Literature.