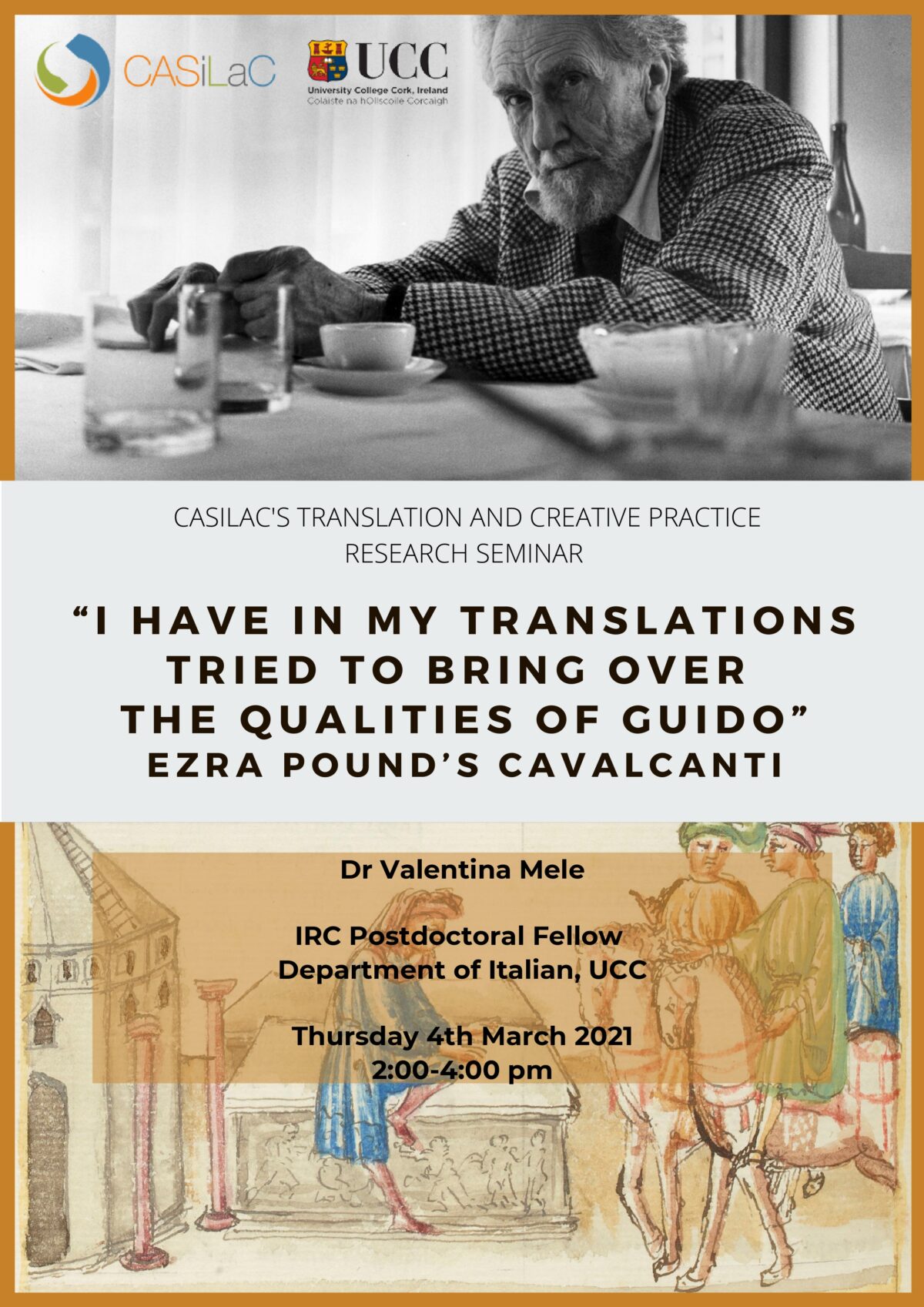 As part of the activities of the research cluster Translation and Creative Practice,
Centre for Advanced Studies in Languages and Cultures (CASiLaC), School of Languages,
Literatures and Cultures, UCC, you are all welcome to the following research seminar:

Link to the event on MS Teams:
Click here to join the meeting

Ezra Pound’s translations of Cavalcanti’s work, emblematically represented by Pound’s critical edition of the Rime (1932), have been traditionally neglected by Italian criticism, when not openly criticised. On the one hand, this paper will reconstruct the twentieth century reception of Pound’s Cavalcanti in Italy by considering some of the most prominent reviews of Pound’s edition (such as those of Mario Praz, Luciano Anceschi, Domenico De Robertis, Gianfranco Contini, Maria Corti) and by discussing them in the wider context of the long-lasting influence of philological approaches, historicism, and the so-called ‘critica stilistica’ which traditionally characterise Italian scholarly criticism. On the other, the discussion will reflect on Pound’s translation choices and methodology in the light of his lifelong fascination for Cavalcanti’s persona as well as of his desire for identification with the Florentine poet.

Valentina Mele is an IRC Postdoctoral Fellow based in the Department of Italian, UCC. She received her BA in Italian Literature and her MA in Philology from the Università degli Studi di Padova, during which time she spent a year at the University of Warwick as a visiting student. She mainly considered intersections between Italian, English, and American literature, working on the reception of Dante in nineteenth and twentieth centuries Anglo-American poetry. She continued her studies at Somerville College, University of Oxford, earning an MSt in Medieval and Modern Languages. Her thesis analysed textual representations of feminine figures in the Italian Duecento love lyric. Valentina holds a PhD from the University of Cambridge. Her doctoral research focusses on the poetry of Guido Cavalcanti (c.1258-1300). She is currently working on her first monograph, entitled Lyric Subjectivity in Guido Cavalcanti’s Rime. Valentina’s broader interests mostly lie in the relationship between language and subjectivity.