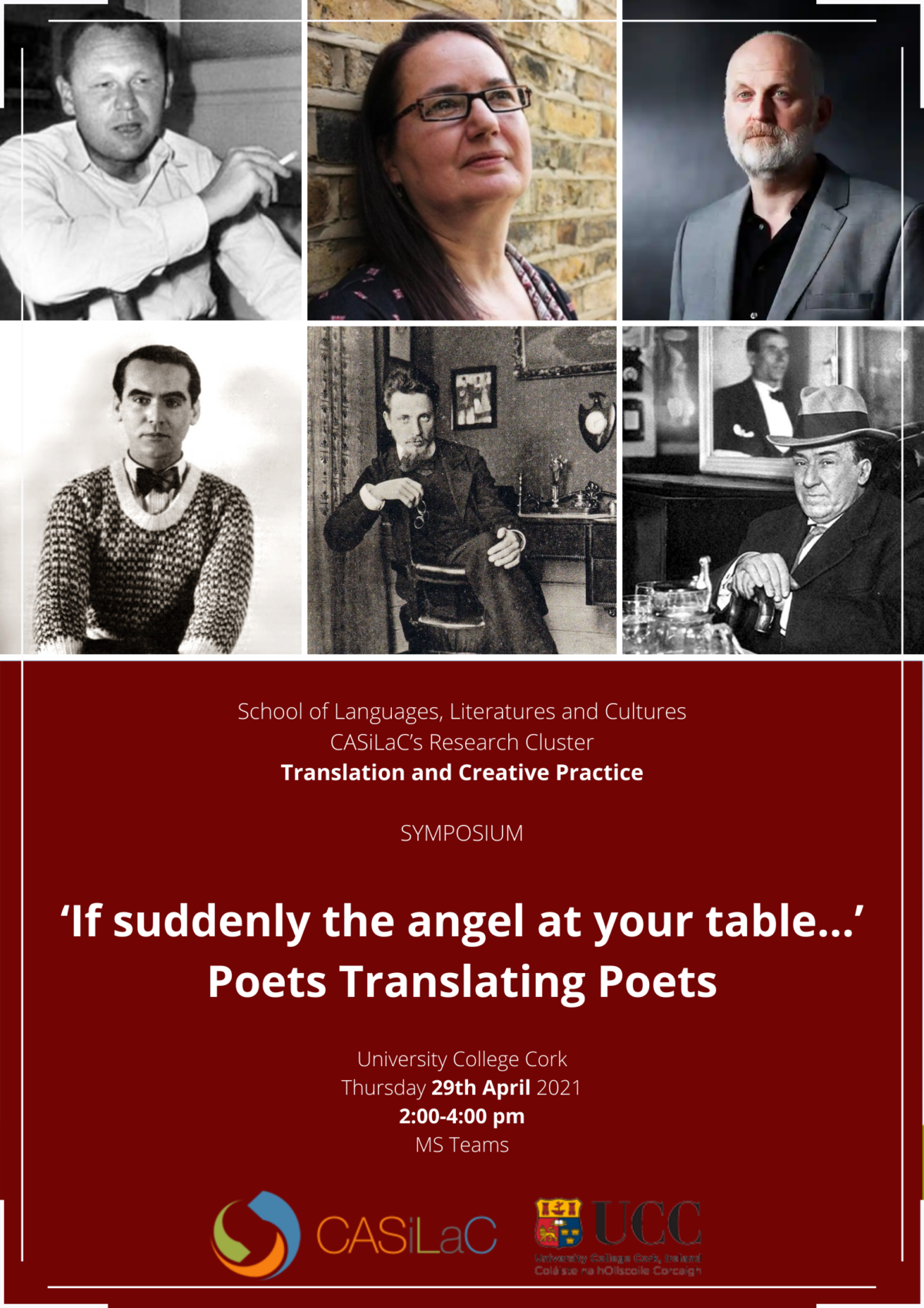 School of Languages, Literatures and Cultures

‘If suddenly the angel at your table…’: Poets Translating Poets

Link to the event on MS Teams:

‘If suddenly the angel/at your table decides to love you’, Rilke wrote in one of his French poems, which suggests what happens when a writer moves into one’s life and refuses to leave, i.e. the relationships we have with writers we love and sometimes translate. This symposium brings together three papers that explore the confluences and interactions that exist between poetry and poetic translation understood in a broad sense that includes practices such as glossing, rewriting, versioning and homage. The three papers focus on the discussion of books written in response to, or in dialogue with, the work of three canonical authors of modern western poetry.

‘Speaking aphids and bees to you in silence’: Jo Shapcott in dialogue with the French Rilke

The poetic maturity of San Francisco poet Jack Spicer (1925-1965) begins in 1957, with the publication of After Lorca, a collection of poetry, prose, and translations, the virtual space for several lyric voices to intertwine and overlap. Opened by an introduction fictitiously written by the ghost of Federico Garcia Lorca (1898-1936), the book is then composed by six epistles to ‘Lorca’ from ‘Jack’, thirty-three translations from Lorca’s (some of them purposely corrupted, some other by Spicer’s, passed off as Lorca’s), and a verse ‘postscript’ for Marianne Moore. The complexity of After Lorca stems from the poetic practice of dictated poetry, a concept Spicer himself presents on the occasion of the first of his Vancouver lectures – three public talks the poet delivered within the summer of 1965, shortly before his death. The present paper seeks to discuss the relationship between Spicer’s dictated poetry and his translations, reflecting on the model of subjectivity articulated in After Lorca.

‘Speaking aphids and bees to you in silence’: Jo Shapcott in dialogue with the French Rilke

Rainer Maria Rilke (1875-1926) had completed the works for which he is most celebrated – the Duino Elegies and the Sonnets to Orpheus – by 1922. Between 1922 and his death in 1926, he wrote almost 400 poems in French.
In 1979, Graywolf Press published Rilke: The Complete French Poems, translated by the translator and academic A. Poulin, Jr.  In 2001, contemporary British poet Jo Shapcott published Tender Taxes (Faber & Faber), her translations of a selection of Rilke’s French poems.
Consideration of Shapcott’s book raises the question of how a woman poet relates to the poets who have gone before. Shapcott’s versions of Rilke also reveal the act of translating poetry to be akin to entering a dialogue that is not always friendly, resulting in a ‘tender and taxing conversation’, rather than a collection of translations.

The most renowned poetry collections of Antonio Machado (1875-1939) have been recently translated into English by Stanley Appelbaum (Fields of Castile, 2007) and Michael Smith & Luis Ingelmo (Solitudes and Other Early Poems, 2015), while several other selections of his work have also been published in English translation through the years, including volumes such as Michael Smith’s Early Poems (1976), Robert Bly’s Times Alone: Selected Poems of Antonio Machado (1983), Alan S. Trueblood’s Selected Poems (1988) and Willis Barnstone’s Border of a Dream: Selected Poems of Antonio Machado (2003). In 1999, Scottish poet Don Paterson published his third collection The Eyes, which is a book of versions – ‘lying somewhere between translation and imitation’ – of Machado’s poetry. This paper will examine some of the translation strategies he adopted in his approach to the work of the Spanish poet and will briefly assess the importance of translation in Paterson’s trajectory.