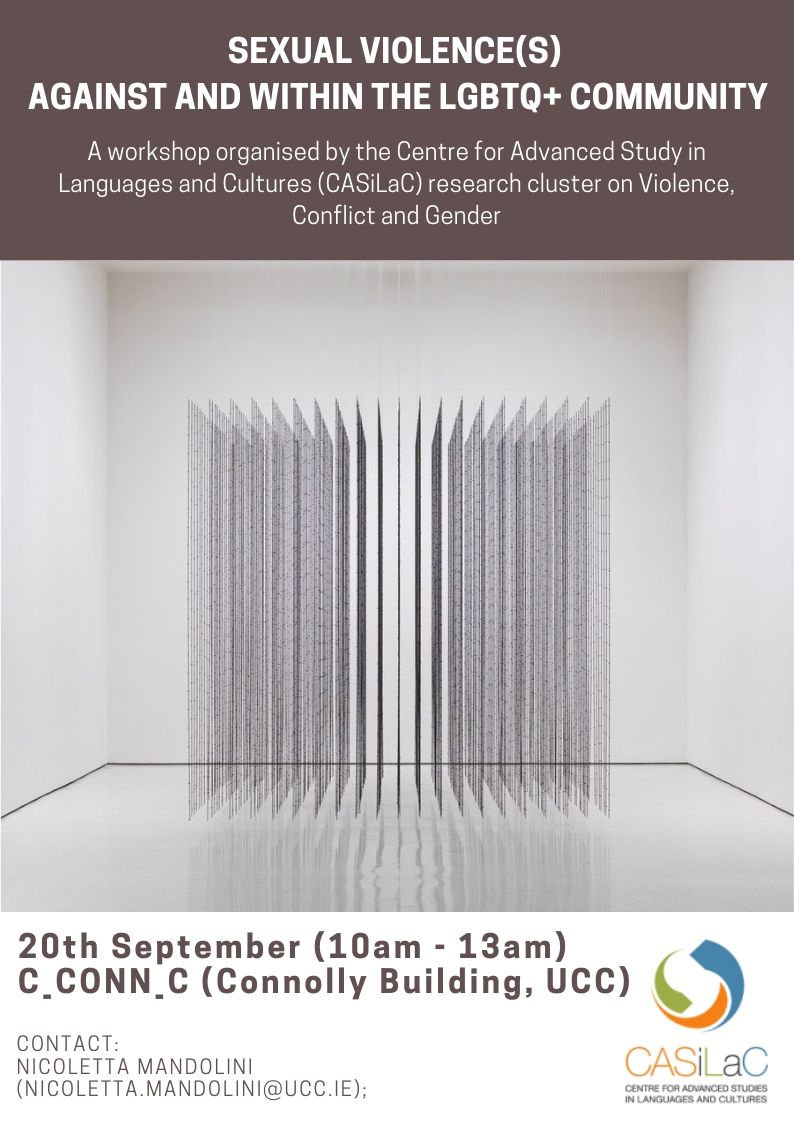 Sexual Violence(s)
Against and Within the LGBT+ Community
20th September (10am-1pm)
C_CONN_C (Connolly Building)
Since the elaboration of a critique of rape in the Sixties, the political and theoretical reflections on sexual violence have been unanimously categorised as a feminist effort. Despite continuing to denounce oppression and violence against women within the heteronormative sphere of relationships, feminist movements have then expanded the range of their actions by including expressions of solidarity and joint statements with subjectivities marginalised on the basis of gender, race, sexual orientation, class, etc. In the wake of this, feminist and queer movements have often combined their practices denouncing the intertwinement of misogynous, homophobic and transphobic violence.
Notwithstanding these synergies, conservative factions that operate outside and within feminist movements have promoted a fixed idea of gender and gender relationships which resulted in recent debates on whether members of the LGBTQ+ community (especially trans and non-binary subjects) should be considered as allies of the feminist struggle against sexual abuse or, on the contrary, as a threat to this struggle.
Drawing on the discussions initiated with Sexual Violence(s): Between Past and Present (UCC 11 April 2019), this follow-up workshop will present research findings and activists’ testimonies on LGBTQ+ people’s experiences of victimisation and resistance, with the objective of outlining the contribution that queer movements and practices can give to the fruitful problematisation of the feminist category of sexual violence.
Keynote Speaker Dr Tanya Ní Mhuirthile (DCU, School of Law and Government)
“Sexual Violence(s) and Intersex People”

Intersex is an umbrella term for a variety of conditions where a person’s sex characteristic do not coalesce in the manner typically expected of male and female people. During the twentieth century medical practices emerged of intervening on the otherwise healthy bodies of intersex people, particularly very young children, and inscribing, through medical and surgical interventions, gender identities on intersex bodies.

This paper will examine these practices and consider the response of law to these interventions to ascertain if and how law could be martialled to better protect the bodily integrity of vulnerable intersex people.
Other speakers include Fiachra Ó Suilleabháin (UCC, Applied Social Studies), Jen O’Shea (Gender Rebels Cork), Siobhan Thomas (UCC, Applied Psychology)
A light lunch will be provided
All welcome!