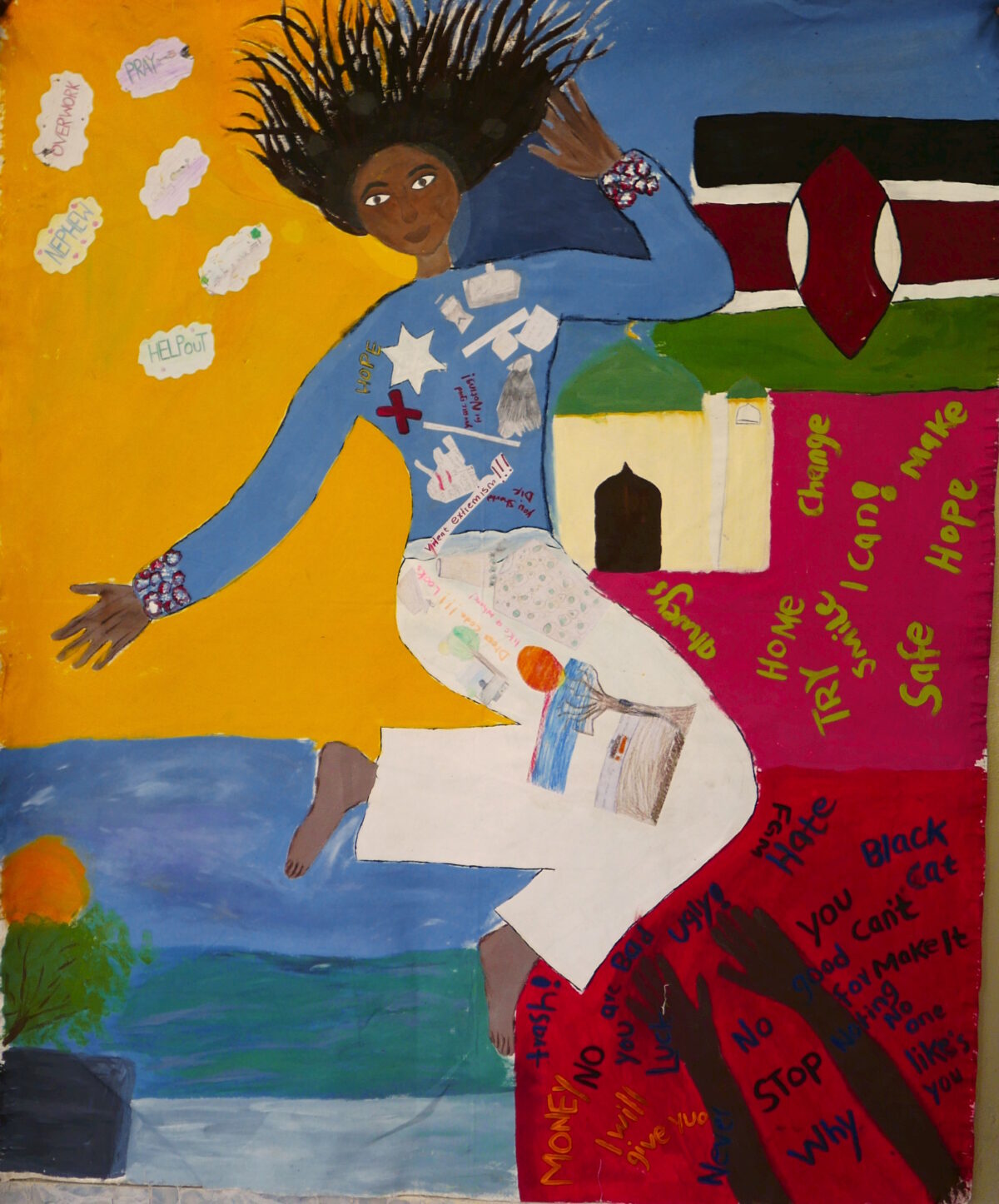 In this public event, Dr Sahla Aroussi, Associate Professor in Global Security Challenges at the School of Politics and International Studies at the University of Leeds presented her work as co-investigator of a Global Challenges Research Fund (GCRF)/ UKRI Global Network research award on Gender and Responding to Violent Extremism, focusing on the body mapping methodology employed to gather perspectives from a diverse group of participants in Kenya.

This paper interrogates how violent extremism is understood and experienced by women at local community level in Kenya using body mapping.  Body mapping is a form of embodied storytelling that allows the participants to reflect on experiences, thoughts and feelings physically through the body, visually through the arts, verbally through storytelling and relationally with the other participants and the researcher (Dew, Smith, Collings, and Dillon Savage 2018). Our study revealed that for many women, violent extremism is an everyday phenomenon experienced primarily in the private sphere in the form of female genital mutilation, forced early marriages, denial of education, and domestic violence. Our research participants considered gender based violence and entrenched gender inequality as a manifestation of violent extremism and the driver of this phenomenon. Yet, in Kenya, the government frames violent extremism using a top down, state-centred and male-shaped approach that prioritises the public over the private sphere making women’s experiences of violence and inequality invisible.  Based on our findings we argue that in order to tackle violent extremism we need to redefine this concept from a gender perspective in a way that makes women’s experiences of violence and insecurity a central element.

Dr Sahla Aroussi is an Associate Professor in Global Security Challenges at the School of Politics and International Studies at the University of Leeds https://essl.leeds.ac.uk/politics/staff/1329/dr-sahla-aroussi. She is a feminist scholar and a gender expert. Her research interests lie at the intersection of gender politics, and peace and conflict research. Her research focuses on ‘women, peace and security’, sexual violence in armed conflict, gender justice, gender and violent extremism, political participation and gender in peace-making and peace negotiations. She has conducted a number of studies on the implementation of the ‘women, peace and security’ agenda. Her monograph entitled Women, Peace, and Security: Repositioning gender in peace agreements (2015) assessed how gender issues are negotiated and included in peace settlements around the world. She is passionate about ending gender-based violence. In her British Academy/ Leverhulme funded study (2015- 2017), using storytelling, she researched justice with survivors of sexual violence in the Democratic Republic of the Congo. Her current research focuses on gender and violent extremism critically engaging with this concept from a feminist perspective. She is currently the principal investigator on a British Academy Tackling UK International Challenges (2018) funded research that uses body mapping as a method to study gender and resistance to violent extremism in Kenya. She is a co-investigator of a Global Challenges Research Fund (GCRF)/ UKRI Global Network research award on Gender and Responding to Violent Extremism (GARVE Network (garve-network.org). This project is led by Professor Fatuma Ali from the United States International University of Africa in Kenya and in partnership with the Rift Valley Institute, Nairobi. The network aims to bring together academics and practitioners from across the globe to discuss, exchange knowledge and expertise, highlight best practices and promote critical thinking on violent extremism from a gender perspective. She is also a Co-Investigator on a UKRI funded project on Performing Violence, Engendering Change: Developing Arts-Based Approaches to Peacebuilding (June 2020- April 2021) (See  project website: https://www.performingviolence.com/ ).  This project is led by Daniele Rugo, Brunel University in collaboration with Kirsten Ainley from the London School of Economics. The project connects artists and researchers from ODA recipient countries across Africa, the Middle East and South Asia working with peacebuilding practices rooted in the arts. It does so by bringing together GCRF and British Academy projects on the impact of the Lebanese civil war on infrastructure; gender and resistance to violent extremism in Kenya.